The United States Centers for Disease Control and Prevention (CDC) is monitoring over 200 people who may have been exposed to the monkeypox virus.

On July 15, 2021, the CDC and the Texas Department of State Health Services confirmed a case of human monkeypox in the U.S. The man, believed to be the first monkeypox case in the country since 2003, acquired the illness in Nigeria during a visit. He was taken to the hospital but is in a stable condition.

To date, there are no new cases related to the monkeypox infection. 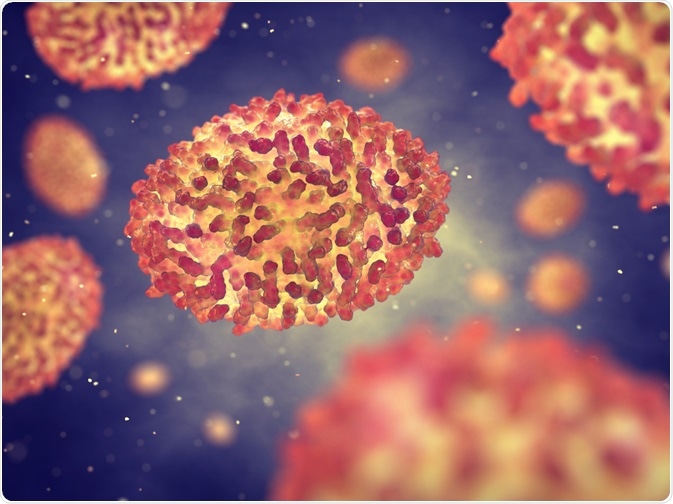 The monkeypox virus is an orthopoxvirus from the same group of viruses as smallpox. Image Credit: nobeastsofierce / Shutterstock.com

What the CDC is doing

Laboratory test results at the CDC showed the case as a strain of monkeypox reported in some parts of West Africa, including Nigeria. While human-to-human transmission is uncommon, infections with the strain are potentially fatal in about one in 100 people infected.

People with compromised immune systems are at a higher risk of severe illness and even death from monkeypox.

Health officials are now working with the airline and state health officials to contact and assess the potential risks to airline passengers and others who may have been in contact with the patient during two flights – Lagos, Nigeria to Atlanta on July 8 and Atlanta to Dallas on July 9.

The CDC confirmed that it would conduct a comprehensive contact tracing to determine potential carriers. The contact tracing will continue until the end of the month, including follow-ups and health checks with those already identified and informed. Overall, health officials are tracing people from 27 states for possible exposure.

Further, the CDC has set up a call center for health departments to hasten the contact tracing of potentially exposed carriers. Doctors can also contact the CDC if monkeypox is suspected in a patient.

Monkeypox is a contagious illness caused by the monkeypox virus that can infect both animals and humans. The monkeypox virus belongs to the Orthopoxvirus genus in the family Poxviridae. The Orthopoxvirus genus also includes other viruses such as the variola virus, the pathogen behind smallpox, the vaccinia virus, which has been used in the smallpox vaccine, and the cowpox virus.

First discovered in 1958, monkeypox caused two outbreaks of pox-like diseases in colonies of monkeys kept for research. The first human case was reported in 1970 in the Democratic Republic of Congo during an extensive effort to eradicate smallpox. Since then, bouts of monkeypox were reported in central and western African countries.

How does it spread?

Monkeypox may spread from handling bushmeat, close contact with an infected person, an animal bite or scratch, contact with lesions, respiratory droplets, body fluids, and contaminated materials such as bedding.

Upon exposure, it may take up to 10 days for the signs and symptoms to manifest, including fever, headache, muscle pain, inflamed lymph nodes, and fatigue. This is followed by a rash that forms blisters and crusts over. These symptoms may last for about two to five weeks.

In Africa, monkeypox has been shown to cause death in as many as 1 in 10 persons who contract the infection.

How to prevent monkeypox?

Basic infection control measures can help reduce the risk of contracting the monkeypox virus. To prevent infection, avoid contact with animals that could harbor the virus, particularly those sick or found dead in areas where monkeypox occurs.

Also, avoid touching any materials that have been in contact with a sick animal, like bedding. For individuals who may have been infected, isolation is crucial to prevent further viral spread. In addition, regular hand hygiene and personal protective equipment (PPE) can help prevent infection when caring for sick patients.

Why do Greece enter Olympic Games opening ceremony FIRST and why is the Greek flag flown at each games?