Many universities saw extensive severe acute respiratory syndrome coronavirus 2 (SARS-CoV-2) transmission among their populations in Fall 2020. This threatened the health of students, staff and faculty, in-person instruction, and also the health of nearby communities.

Researchers from the U.S. recently reported a multimodal “SHIELD: Target, Test, and Tell” program that helped mitigate the transmission of SARS-CoV-2 at a large public university. The program also prevented community transmission and helped the continuation of in-person classes during the pandemic. This study is available on the medRxiv* preprint server. 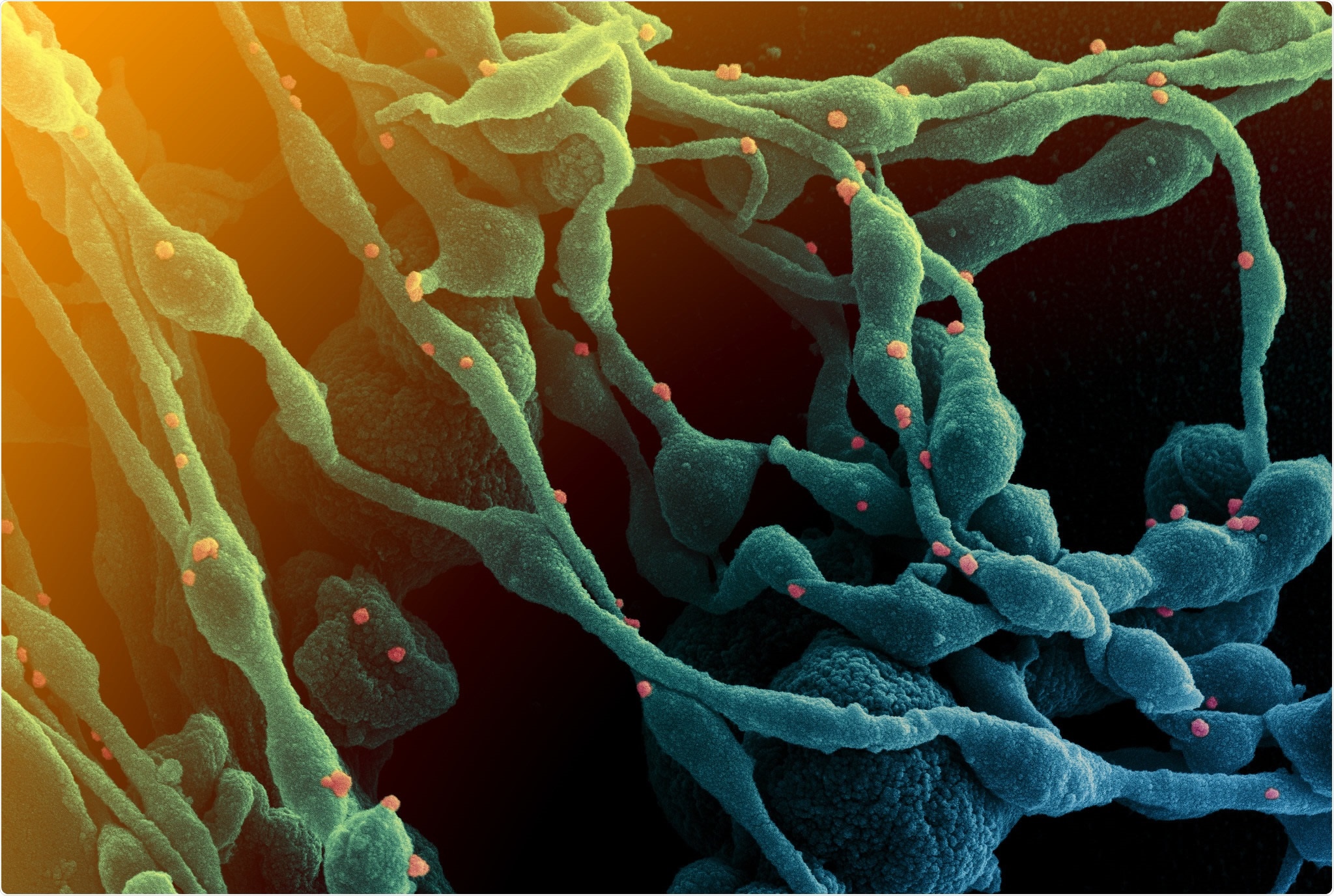 The SHIELD program was developed to minimize SARS-CoV-2 transmission via identification and safe isolation of infected individuals before the spread of the virus. The Target, Test and Tell components of SHIELD are synergistically used and helped achieve the transmission mitigation goal.

The program combines three elements: 1. epidemiological modeling and surveillance (Target), 2. covidSHIELD (Test) – a fast and frequent testing assay that uses a novel, low cost, FDA Emergency Use Authorized, and scalable saliva-based RT-qPCR assay for SARS-CoV-2 that bypasses RNA extraction, and 3. digital tools that can provide test results, notify of possible exposures, and promote compliance with public health measures (Tell). These 3 elements were combined with social distancing, mask usage, and robust education efforts. As a result, the researchers performed over 1,000,000 covidSHIELD tests while keeping classrooms, labs, and other activities open at the university. 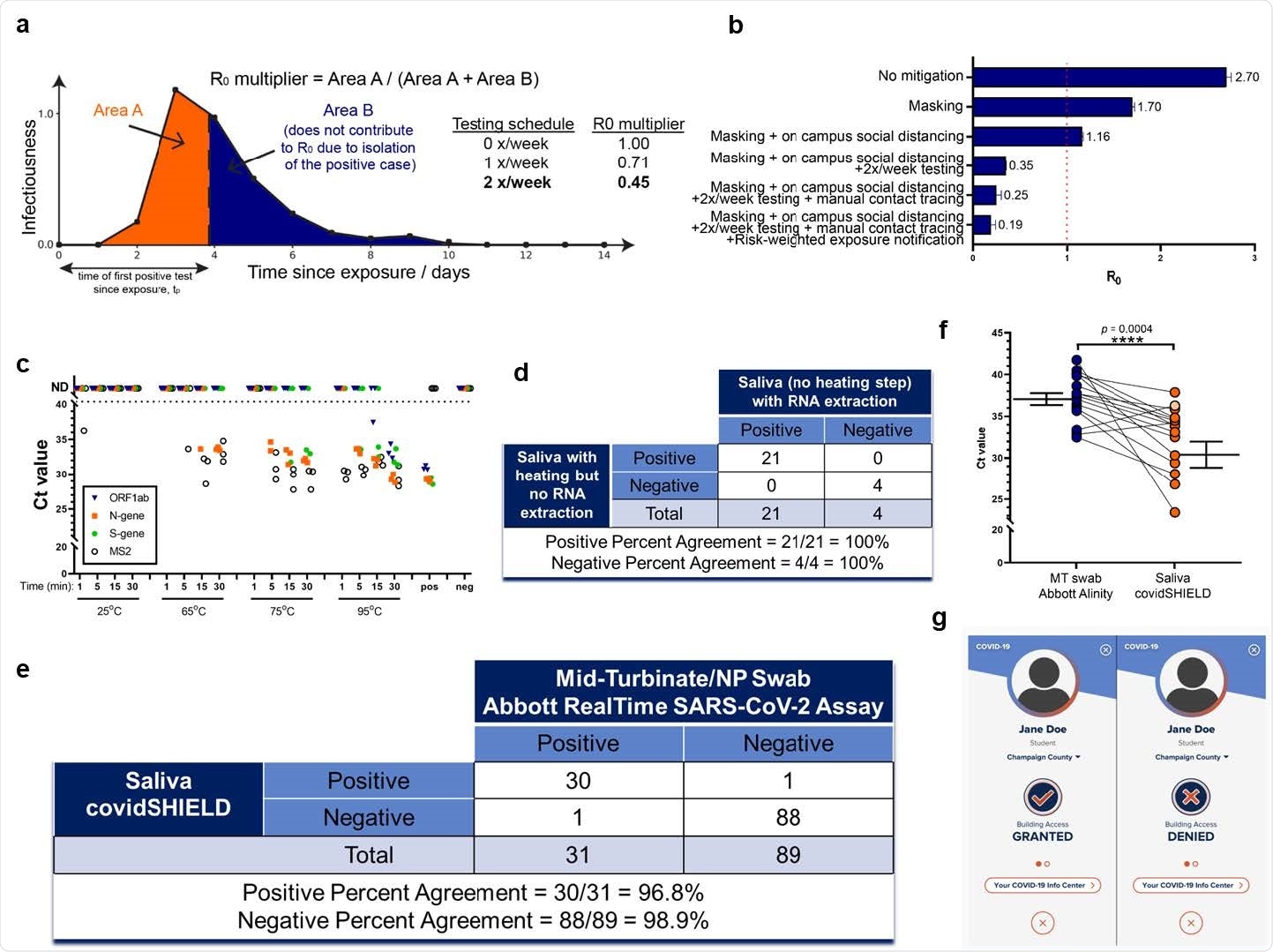 Target, Test, and Tell. a, Sensitive testing can reveal a positive case early in the infection, and thus isolation of the index case reduces the number of people infected by this index case. Frequent testing and rapid isolation reduce the time period during which a person is infectious but not isolated (Area A). As a result, the R0 multiplier for testing is the ratio between the truncated area under the curve (Area A) and the untruncated area under the curve (Area A + Area B). The dashed vertical line between Area A and Area B represents the moment an infected individual is isolated; as this line moves to the left, M is decreased and viral spread is reduced. b, Effect of different mitigation interventions on the basic reproduction number R0 as computed in our agent-based model. If R0 is greater than one (orange dashed line at R0=1), the epidemic grows exponentially. If R0 is less than one, any outbreak diminishes exponentially. Without any mitigation, R0 is close to 3 and a runaway epidemic will occur. Masking and social distancing help reduce transmission but can’t suppress the growth of cases on their own as R0 is still greater than one. However, when these measures are combined with frequent testing (2 tests a week), R0 drops to 0.35 and containment of epidemic becomes possible. Adding extra mitigation interventions such as manual contact tracing and risk-based exposure notification being R0 further down to 0.19 suggesting the potential for strong control of the epidemic on campus. The details of the agent-based model are given in Supplementary Materials. The results shown here are computed assuming that 100% of the students are compliant with twice-a-week testing, isolation, and quarantine. We also ran the same simulation assuming 60% compliance, and the same general trends were observed with R0 for the full SHIELD program predicted to still be manageable (0.5, see Extended Data Fig. 1). c, The effect of heat on SARS-CoV-2 nucleic acid detection in saliva. γ-irradiated SARS-CoV-2 (from BEI, used at 1.0×104 viral copies/mL) was spiked into fresh human saliva (SARS-CoV-2 negative). Samples diluted 1:1 with 2X Tris-borate-EDTA (TBE) buffer (0.5 mL in 50 mL conical tubes) were incubated at 25°C (ambient temperature), or in a hot water bath at 65°C, 75°C, or 95°C, for 1, 5, 15, or 30 min. All saliva samples were spiked with purified MS2 bacteriophage (1:40 MS2:sample) as an internal control. Virus-spiked saliva samples, a positive control (pos; SARS-CoV-2 positive control, 5.0×103 copies/mL, no MS2) and negative control (neg; water, no MS2) were directly analyzed by RT-qPCR, in triplicate, for SARS-CoV-2 nucleic acid corresponding with ORF1ab gene (blue triangle), N-gene (orange square), and S-gene (green circle), and MS2 (open circle). Undetermined Ct values are plotted as ND. This experiment was repeated at least three times. d, 25 clinical saliva samples were split into two aliquots upon receipt, one set was processed using our covidSHIELD assay and the other set was subjected to RNA extraction using MagMax Viral/Pathogen II (MVP II) Nucleic Acid Isolation Kit (ThermoFisher). 5uL of either processed saliva (in 1:1 2x TBE/Tween-20 buffer) or purified RNA (in water) were subsequently used as templates for RT-qPCR. A positive result is called when two out of three viral target genes is detected. e, Qualitative outcome of parallel testing of paired mid-turbinate swabs and saliva with the Abbott RealTime SARS-CoV-2 assay and covidSHIELD. A total of 120 participants were enrolled in a clinical study comparing results from contemporaneously collected nasopharyngeal or mid-turbinate nasal swabs analyzed by an FDA Emergency Use Authorized reference method for detection of SARS-CoV-2 and saliva samples analyzed by covidSHIELD. Overall concordance was 98.3% (95% CI, 94.1-99.8%), positive percent agreement was 96.8% (95% CI, 83.2-99.9%) and negative percent agreement was 98.9% (95% CI, 93.9-99.9%). All clinical trials were reviewed by the Western Institutional Review Board. All participants gave written and informed consent. f, Additional clinical study outcome of 17 individuals confirmed to be positive for COVID-19 and to have low viral loads (Ct = 32-42, average 37) by midturbinate nasal swabs analyzed at the Johns Hopkins University School of Medicine using Abbott Alinity compared with contemporaneously collected saliva samples that were analyzed using the covidSHIELD assay at the University of Illinois Urbana-Champaign CLIA-registered laboratory. p-value=0.0004 was calculated using 2-tailed, unpaired t-test. g, Mock representative images from the Safer Illinois app demonstrate how compliance with the SHIELD testing protocol was coupled to building access. The screen on the left appears when a user is in compliance with the campus testing protocol and has received a recent negative test for SARS-CoV-2. The screen on the right appears when the user of the app is out of compliance, when they have had a recent exposure notification, or when they have tested positive for the virus. The area within the upper circle containing silhouette image typically displays a picture of the user of the app, one of a number of security features built into Safer Illinois.

Generally, the case positivity rates remained under 0.5%, and transmission from students to faculty and staff was prevented, and data gathered indicate that there was no spread in classrooms or research labs. During the fall semester, there were no COVID-19-related hospitalizations or deaths among the university community.

The program also prevented transmission of the virus from the university population to the surrounding Champaign County community. The authors’ experience demonstrates that multimodal transmission mitigation programs could help university communities achieve positive outcomes until mass vaccination against COVID-19 is achieved. These programs also provide a roadmap for addressing future pandemics.

As the ~35,000 undergraduate students at the University of Illinois at Urbana-Champaign (UIUC) left the campus in Spring 2020 to continue their learning remotely, it was clear that their return in the Fall would pose significant challenges. The biggest concern was that unmitigated transmission of the virus among the undergraduate student population would drive more cases in the staff and faculty and the surrounding community.

“Combined with masking and social distancing, fast/frequent testing helped mitigate the spread of COVID-19 in the Fall 2020 semester for a large and diverse public University community.”

The SHIELD program was also deployed in other communities such as a large public university, a few high schools, a community college, a federal courthouse, and a large private corporate campus. Saliva samples collected from these communities were processed and analyzed using the covidSHIELD assay. The test results were evaluated as per the interpretation tables in the EUA Summary and the weekly averaged positivity rates plotted against the period during which the samples were processed.

“The covidSHIELD saliva test is highly scalable and easy to implement, allowing fast, frequent and accurate testing in a large community.”

According to the authors, the three significant contributions of their work are: 1. the development and deployment of the multimodal program – a comprehensive effort to mitigate the transmission of COVID-19 at a large university that prevented community transmission and helped continue in-person classes during the pandemic; 2. the description of the novel, saliva-based, and scalable RT-qPCR assay for SARS-CoV-2 that bypasses RNA extraction; and 3. the evidence that fast and frequent testing can help mitigate SARS-CoV-2 transmission after infection spikes occur.

“Our results stand to better enable communities to open more safely as the world bridges to widespread vaccination against COVID-19. They also provide a playbook for addressing the next pandemic.”

Antidepressant drug fluvoxamine may prevent some serious complications of COVID-19