Health and climate change in Australia


The MJA–Lancet Countdown has published its annual update on climate change and related factors in Australia. The report underlines the fact that there is no national adaptation strategy to cope with climate change and health, leaving the country vulnerable to this looming threat. The researchers say,

There is a stark contrast between Australia’s world‐leading COVID‐19 response and its world‐lagging climate change response.” 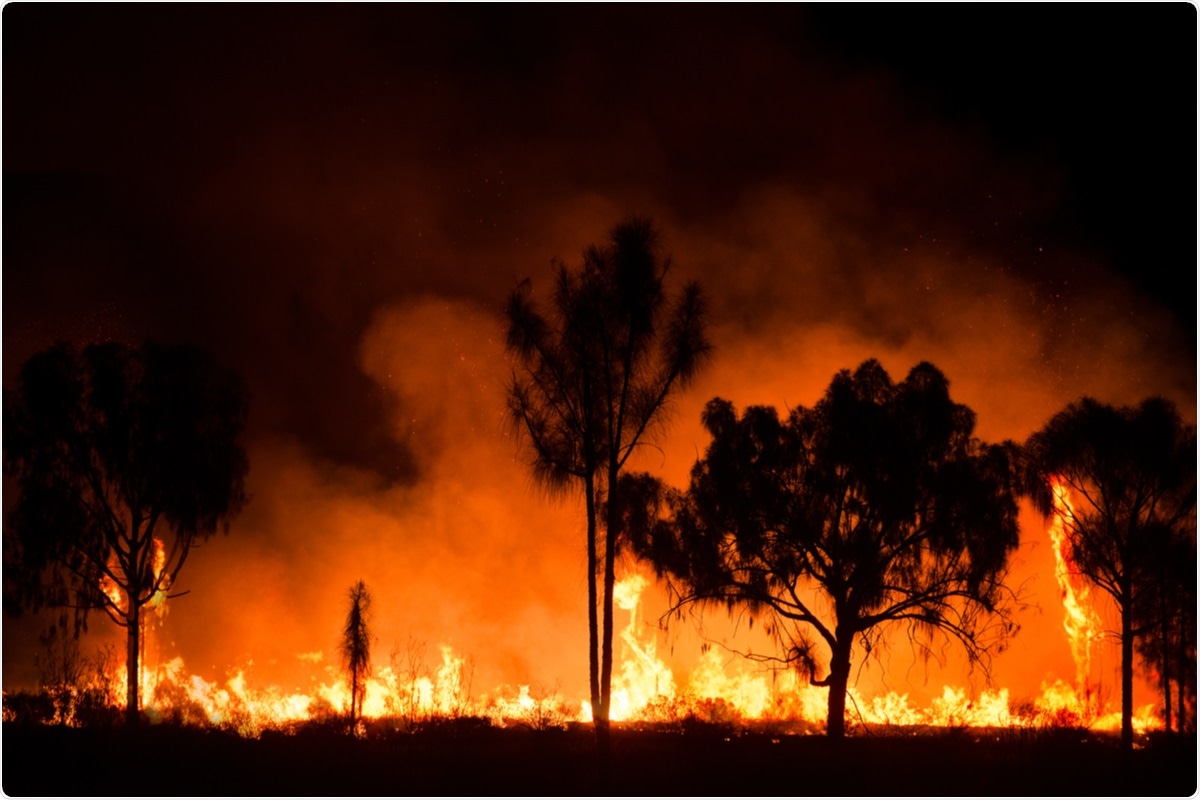 Study: The 2021 report of the MJA–Lancet Countdown on health and climate change: Australia increasingly out on a limb. Image Credit: JP Phillippe/ Shutterstock

Over the last couple of years, Australia has undergone unprecedented bushfires as well as flooding and cyclone-related threats. Each of these has left its mark on the people, both physically and mentally, despite advanced and sensitive disaster management systems.

However, Australia is reluctant to reduce emissions, promising a drop of only up to 28% by 2030 relative to 2005. In contrast, other countries have made larger commitments at the climate summit in April 2021.

If global emissions are not reduced below the threshold of 1.5°C, the world will have to face hot and dangerous weather conditions, as are already happening in several parts of the world.

The 2021 MJA–Lancet Countdown report represents a collaborative effort between University College London, and seven Australian institutions, mediated by The Lancet in partnership with The Medical Journal of Australia. Five domains are followed here:

These domains comprise 37 indicators, which were followed by the researchers, including seven new ones.

The report found an increase in the Heat Exposure Vulnerability Index (HEVI) for Australia, showing that this measure exceeds the global average, indicating that the country has a high proportion of elderly and/or sick people who are more vulnerable to heat exposure, as well as a larger urban population which is linked to higher temperatures.

Almost a third had limited access to healthcare and less ability to adjust to climate change.

Indigenous Australians are especially affected by climate change, with higher rates of cardiovascular or chronic respiratory illnesses (16% and 29%, respectively), both causing markers of increased heat stress and physical stress from changes in the climate. Half of them between 15-64 years were unemployed, and a fifth was too crowded at home.

Heatwaves have become common, daily temperatures shooting up exponentially to a third more. The mean three-day temperature is excessively high compared to the recent past and long-term trends. The heat increased by over a third over the last 20 years, indicating that temperatures were rising exponentially.

Productivity plunged due to heat stress, with the loss of almost 60,000 potential work hours for work done in the shade, almost double the 10-year average from 1991 to 2000. Construction and service sectors bore 36% to 41% of these losses, and manufacturing sectors 13%.

Construction work in the sunlight lost almost 68,000 hours, vs. 25,000 on the 10-year average, mostly in New South Wales and Queensland at 17,000 to 18,000 each. Cold-related deaths appear to have increased by 74/100,000 over the expected, but in the eastern part of Australia, these are decreasing while heat-linked deaths are increasing.

Bushfires were larger, hotter, and harder to control than ever before, and the days of exposure have been going up since 2001, with over 191,000 person-days in 2020. Droughts were severe over almost 80% of the land surface, tenfold the baseline, over much of the country.

Many people had to migrate because of climate change leading to a rise in the sea level. Bushfires led to the displacement of 25,000 people in 2019 vs. 47,000 in 2020, continuing the rise seen first in 2008. This may make it more difficult to access food, housing, social networks, and health services.

There remains no national climate change adaptation plan for health for Australia“, the researchers point out.

However, Queensland and Victoria have their own health adaptation plan. Some other states have adopted climate change adaptations into their health plans.

Impact assessments are done mostly by non‐government organizations such as the Climate Council, a non-profit that includes health, medical, and climate change experts. Many cities have their own strategies for climate risk evaluation, and more local councils are taking part in the Cities Power Partnership.

Forecasting services include warnings of heatwaves and ultraviolet radiation while smoke forecasts are being planned. Thunderstorm asthma forecasts are available in Victoria during the season of grass pollen from October to December.

Urban green spaces are mostly in richer areas, which means they are very low to moderate across most of the country. Adaptation planning in Australia is fragmented and largely subnational. Few Australians are optimally protected from high heat risk conditions and have adequate access to green areas.

Policy planning and long-term strategies have not addressed reducing carbon dioxide emissions to a net-zero emission target by 2050. The government intends to invest in green projects and storage, but with limited funding. Most power generation and transportation come from fossil fuels, and the changeover to cleaner fuel is slow and limited.

The per-unit carbon dioxide emission of Australia is surpassed only by that of China in recent years. Australia remains among the largest coal exporters globally, providing 29% of the world’s coal exports and almost 90% of coal-burning capacity. Renewable sources include wind (over a third) and hydroelectric dams (23%).

In keeping with this picture, renewable electricity production from low-carbon sources has a small share compared to other developed countries. The target of generating 33 000 GWh from wind and solar farms or hydroelectric power stations was exceeded a year early.

Domestic solar rooftops increased, with almost 288,000 installations in 2020, and a more than 26% rise between January and June 2020 compared to last year.

Remote communities have less access to these tools, but over $50 million has been pledged over the next five years for this purpose by the government. The aim is to replace and upgrade energy equipment networks in such areas.

Air pollution is below the thresholds prescribed by the World Health Organization (WHO) in most cases. Still, the harmful level of particulate matter with a diameter less than < 2.5 µm (PM2.5) is not defined. PM2.5 causes premature mortality made up 2% of total deaths and lost life expectancy.

The PM2.5 reduction, due to burning wood and motor vehicle emissions, crossed age groups. Sustainable transport is steadily increasing, as with electric vehicles. Other measures, including walking or cycling to work, using public transport or working from home, must be introduced on a larger scale, increasing physical activity in some cases while limiting pollution.

Greenhouse gas emissions can also be reduced by reducing the consumption of red meat, linked to diet-related deaths, which increased by almost a fifth over 2000 to 2017. Compared to the UK where deaths from unhealthy eating went down a group.

The healthcare sector alone accounts for over 5% of the greenhouse gas emissions in the country. Australia continues to lag in its shift towards sustainable sources of energy, unlike other developed countries.

The costs of early death due to heat-related causes amount to about $7 billion for people aged 73 years. This age group is focused on because of the sudden jump in deaths due to heat in people above 65 years.

More than 4000 megawatts of coal generation capacity have been taken off the market, and new investment in this field is not planned. Renewable energy sources are helping to replace coal as fuel, including almost 7,000 megawatts of wind and solar capacity added newly to the market, as well as battery storage. Another 3,300 megawatts are planned to be commissioned by the end of the year.

Employment has also surged due to the construction of rooftop and large-scale solar panels and wind farms, by over 130% since 2015-16, mostly in Victoria at 72%, and Southern Australia at 41%. High-carbon industries like coal mining have seen an increase by 6% and are still employing six times as much full-time equivalent labor as renewable energy sectors.

Engagement with the public and politicians

The main topics were, unsurprisingly, bushfires and extreme heat, which together made up almost 30% of the total, peaking during the Black Summer of 2019-2020. There were four times as many mitigation-related articles as those on adaptation strategies. Publications on health and climate change increased 6.6 times from 2008 to 2020.

The Australian government and parliament introduced several bills related to health and climate change, of which two were passed. The Department of Health did not deal with climate change to any great extent, but states and territories had multiple regional plans and action plans.

Research grants fared poorly with zero funding in 2019 and one in 2020. At present, the 5‐year, $10 million NHMRC Special Initiative in Human Health and Environmental Change has been rolled out to enhance research in this area.

The continued absence of a national health and climate change adaptation plan is a glaring gap in Australia’s preparedness. Australia now stands at a crossroads and has an opportunity to set a course redirection.”

The 26th UN Climate Change Conference of the Parties (COP26) is due to be held in early November 2021. This could be the time to commit to much greater reductions in emissions and move towards renewable energy, supporting financial recovery via employment in the renewable energy fields.