An interesting preprint by researchers from Washington University School of Medicine and the National Cancer Institute, USA, claims to have reproduced disease mechanisms due to coronavirus disease 2019 (COVID-19) in the fruit fly, Drosophila, while also providing proof of the efficacy of one drug against these disease processes. If validated, these findings represent a new understanding of how the virus causes neurological symptoms that could help develop more effective therapies. 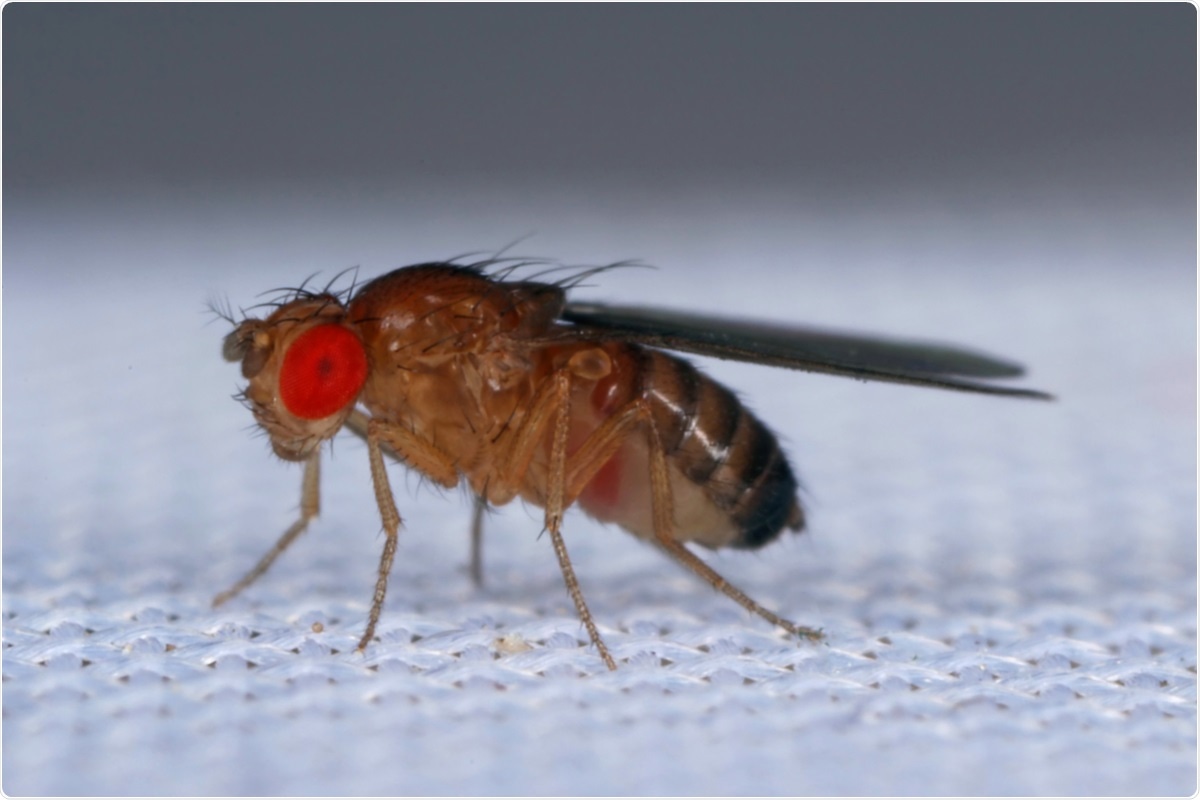 The team’s findings can be found on the bioRxiv* preprint server.

COVID-19 has by now caused over 76.88 million cases, 1.7 million deaths, and devastating economic disruption. Primarily a severe pneumonic illness, affecting the lungs, it is caused by the severe acute respiratory syndrome coronavirus 2 (SARS-CoV-2). Much progress has been made into understanding the mechanism of viral infection. However, much remains to be known about how the viral proteins lead to human disease, particularly the neurological symptoms that continue to plague individuals after their recovery from this infection.

The current study uses the fruit fly to simulate the pathogenesis of the infection. The viral proteins encoded by SARS-CoV-2 seem to be unusually toxic to the human host. The authors say,” After the active SARS-CoV-2 infection is cleared, or no longer detectable, a majority of recovering patients will experience post-viral syndrome with indications that include neuropsychiatric symptoms and extreme fatigue lasting for several months.” The cause of these symptoms requires careful study.

The viral genome consists of 11 genes that comprise 14 open reading frames (ORFs). These encode 16 non-structural proteins (Nsp 1-16), 4 structural and 9 accessory proteins. Among these, the accessory ORF3a protein is found only among coronaviruses. Its structure and function have already been well studied in the earlier SARS epidemic.

In the SARS-CoV infection, this protein has been found to produce inflammation via a protein called TRAF3. The interaction of these two proteins causes IL-1/IL-18 to mature, triggering the inflammatory pathway, and eventually ending in severe lung damage, involving cell pyroptosis and apoptosis. ORF3a also causes cell vesiculation and golgi fragmentation, findings often observed in patient samples.

The ORF3a produced by the current virus also appears to be pathogenic. Some in vitro studies show the onset of apoptosis, or cell death, mediated via the caspase pathway. Computational modeling has shown that the rate of mutation in this gene is directly proportional to the rate of mortality following SARS-CoV-2 infection. This protein also facilitates viral replication by allowing the virus to take over the host cell autophagic mechanism. This is not found with SARS-CoV ORF3a even though it shares 72% of amino acid with the SARS-CoV-2 ORF3a. 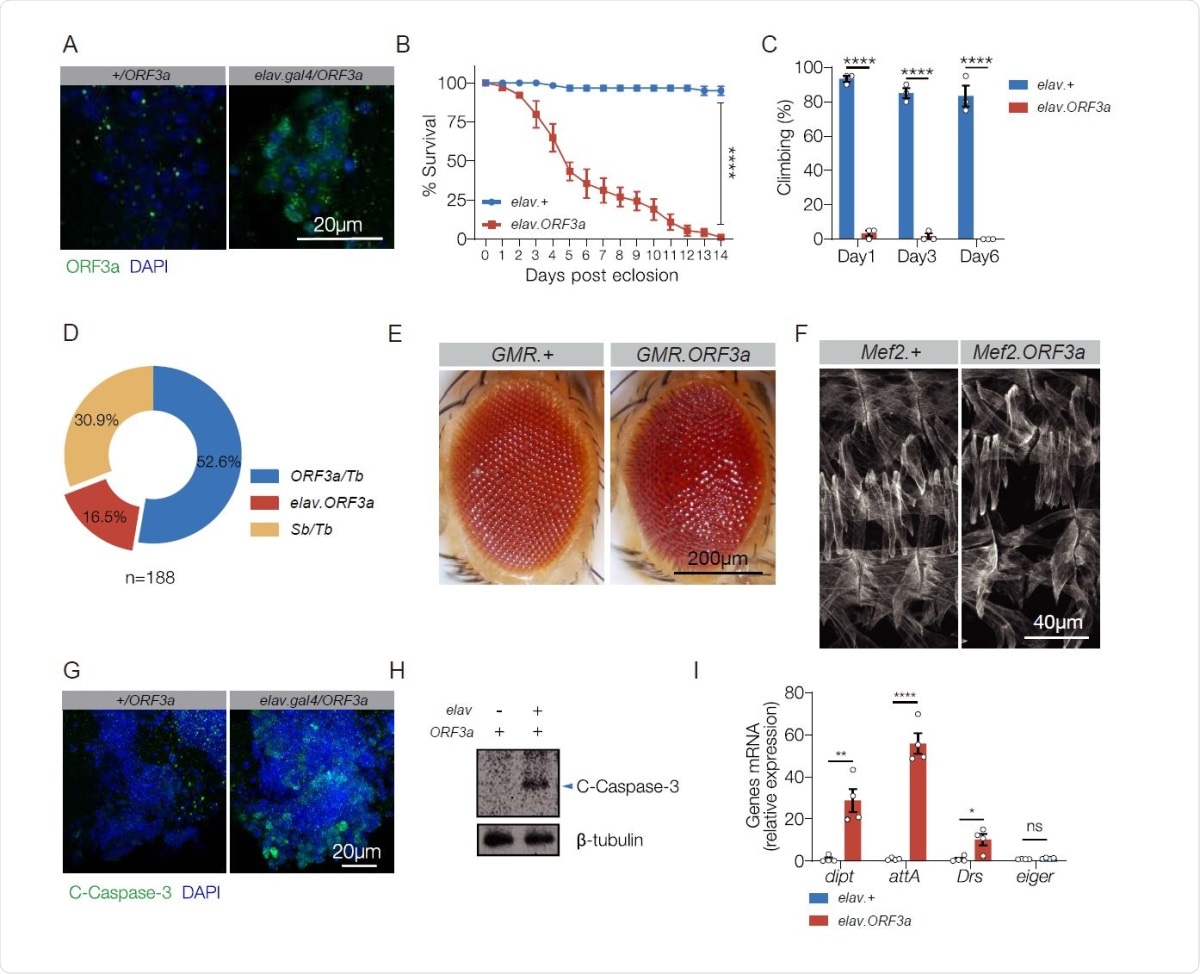 The SARS-CoV-2 post-viral syndrome is now well-identified, but its treatment is not established. Pathogenicity studies in transgenic mice that express the human receptor, thus mimicking human infection, are hampered by the scarcity of such animal models, as well as the biosafety level 3 (BSL3) facilities needed to research on these viruses.

The researchers therefore opted for another route, where specific drugs could be tested against the effects caused by a given viral protein, to establish the level of protection offered. For instance, a molecule that prevents hyperinflammation and apoptosis due to pathogenic ORF3a or other toxic viral proteins could offer therapeutic advantages.

Drosophila is an old and established model for genetic studies, and has been used to identify the pathogenesis of multiple viral infections. Its short lifespan and rapidly visible phenotypic expression of changes due to genetic modifications has made it a favorite among drug screening tools. The current study therefore uses an in vivo fruit fly model to study the pathogenicity of the virus.

The transgenic fly model they used expresses ORF3a regulated by UAS. They used the GAL4/UAS system to express ORF3a in the central nervous system (CNS), in photoreceptors and in smooth muscle/skeletal muscle cells. While ORF3a was expressed at high levels in each of these sites, phenotypic changes were seen only when expressed in the CNS.

The effects observed include a shortened lifespan, from a median of 14 days in controls to 5 days in the experimental flies, abdominal swelling in over 90% of flies, and poor climbing performance, at only around 2% of controls. It also seems to affect the survival of larval stages. Within the photoreceptors, ORF3 expression causes a rough eye appearance, which is due to defective ommatidia patterning and apoptosis. No significant effects were seen following its expression within muscle cells.

This pattern agrees with clinical findings where over a third of hospitalized COVID-19 patients show neurological complications such as loss of consciousness, stroke, difficulty with concentration, loss of memory, dizziness and insomnia. However, less than a tenth show symptoms related to the musculoskeletal system. Thus, ORF3a appears to be pathogenic in only some tissues, especially the CNS.

In the fruit fly, a shorter lifespan and poor motor function are signs of neurodegeneration. Indeed, studies of the adult brain in COVID-19 patients show caspase-3-associated cleavage.

Many COVID-19 patients show signs of neuroinflammation, which could be induced by damage-associated molecular patterns (DAMPs). In Drosophila, DAMPs from dying cells are known to initiate sterile inflammation and an immune response via Toll-mediated pathways. A similar sterile inflammatory response was found to be induced by ORF3a expressed in the CNS via the Toll receptor pathway and the IMD pathway. “These data demonstrate that ORF3a expression alone is sufficient to cause apoptosis, neuroinflammation, and neurotropism, and suggest ORF3a is a major virulence factor of SARS-CoV-2.” The ability to reproduce the characteristic features of SARS-CoV-2 infection as seen in vitro and in COVID-19 patients in these transgenic flies is a valuable one.

In the Vero cell culture system, the deacidification of lysosomes is essential for the release of the virus. The researchers found that ORF3a causes lysosome deacidification, as does toxic stress in U2OS cells. The drug chloroquine phosphate (CQ) could inhibit deacidification induced by chemicals. CQ could not prevent SARS-CoV-2 infection in clinical trials. However, the current findings suggest it may play a role in preventing the specific pathological effects of ORF3a on certain tissues.

Indeed, the fruit flies treated with CQ had a median lifespan of 14 days compared to untreated flies, with better motor control (10% vs 1% of controls), and a greater larval stage survival, at 72% vs ~50% for treated and untreated flies, respectively. “These proof of principle studies largely validate our ORF3a Drosophila model as an efficient COVID-19 drug-screening platform.”

The mechanism underlying this phenotypic improvement included a reduction in caspase-3 cleavage and Toll receptor activity, but not IMD pathway activity, after CQ treatment. This could be because the former is a more immediate target of DAMPs from dead cells. On the other hand, CQ may also work via the efficient inhibition of lysosome deacidification. Thus, ORF3a is a key target for the prevention of post-viral syndrome, and can be affected by drug therapy.

The current study thus shows the potential role of the viral ORF3a in producing post-viral symptoms related to the CNS, and the possibility of CQ and other drugs in preventing these effects. This could be important in preventing the high healthcare burden caused by residual post-viral neurological symptoms even after patients become negative for viral RNA. These transgenic flies are possible vehicles for future drug screening studies to reveal more potentially useful drugs.

Study could help improve design, fabrication, and use of nanofiber face masks