TYSON FURY has declared he is not thinking about retirement ahead of his WBC heavyweight title showdown against Dillian Whyte.

The Gypsy King faces his British compatriot at Wembley next week in what will be his first fight in England since June 2018.

Speaking in March, the 33-year-old declared how he was aiming to hang up his gloves with £150million in the bank from his career earnings.

His trainer SugarHill Steward suggested earlier this month how nobody believes the unbeaten Mancunian will pack it in.

And Fury’s dad earlier this week laughed off his son’s retirement talk as he labelled his claims as “bulls***”.

Commenting on the possibility of him waling away, John Fury said: “Bulls***. Tyson is as mad as a box of frogs, where’s he gonna go without boxing? 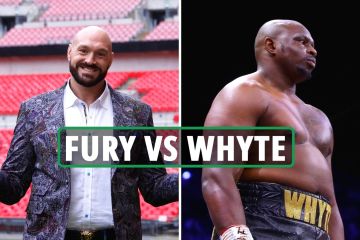 “Boxing’s his life… Tyson’s the biggest wind-up merchant in the world, people should know him by now.”

Tyson has now backtracked on his initial threat to retire, as he spoke of his future on a virtual press call.

“That will all come after I have had the fight and we will think about what is to come, what the future holds for me.

JOIN SUN VEGAS: GET A FREE £10 BONUS WITH 100s OF GAMES TO PLAY AND NO DEPOSIT REQUIRED (Ts&Cs apply)

“At the minute I have a massive task in Dillian. A lot of people are underestimating Dillian Whyte – but not me.

“I give the guy all the respect he deserves throughout the training camp, I have been training since January, breaking all records in the gym, so I am feeling good, looking good.

“I am not underestimating this guy and have given him the respect I did for Deontay Wilder.”

He added: “I’m so happy at being paid so well for a job I love to do. I’ve had a great career. These are my moments in time and every one of them is precious.

“They pass by so quickly that when I’m in the ring even a 12 round fight seem to me like only two minutes.

“That may seem like madness but I love every second of it. I’ve been doing it for 14 unbeaten years and I just keep rolling along.”